HISTORY OF THE BGV CLUB

The early years of the BGV Club are inextricably linked with the arrival into England of both the Petit and Grand Basset Griffon Vendeen.   The following charts some of the milestone events in the formation of the BGV Club in the UK, progress made by the club in establishing the breeds in their new home and the culmination of Challenge Certificates being awarded for the first time in both breeds. 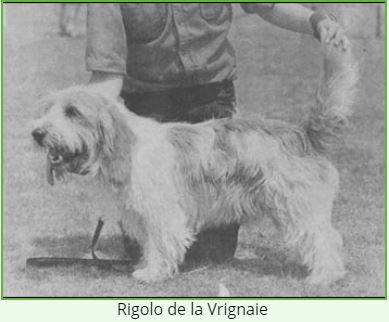 With interest in the breed increasing, an inaugural meeting of the Basset Griffon Vendeen Club took place on 19 February 1978 at Hemel Hempstead, Hertfordshire and, soon after, the club's first newsletter was published. The club name was carefully chosen to allow for the later establishment of the Grand Basset under the same umbrella.

The first Annual General Meeting was at Northchurch, near Hemel Hempstead, on 25 February 1979 by which time there were 42 members.

On Mildred Seiffert's advice that a club show might not yet be financially viable if held on its own, the club's first open show took place that year on 26 May as part of Hertfordshire Canine Society's open show.  George Johnston was the judge and he awarded BOB to Ruth Brucker's Twinrivers Babette.

Work continued on the Breed Standard, commenced in 1978.  French imports to the UK were initially registered in France as BGVs.  These and others born in England were therefore similarly registered at the Kennel Club in England, so the question arose of one Standard incorporating both sizes of BGV.  An old 1920s French Basset Griffon Vendeen Standard formed the basis of the draft.

Doubts were expressed over one Standard covering both Grand and Petit, especially as UK judges would only be seeing the Petit.  Also, the KC pointed out there was no need to register another breed with them which did not currently exist in England.  Despite this, and bearing in mind the club name - and that Grands Bassets would doubtless one day arrive in England - the committee felt it had a duty to look after the interests of both breeds and sought to resolve this by re-submitting the 1979 draft BGV Standard with a few amendments.

The KC was aware of substantial differences between the Petit and Grand Basset Griffon Vendeen, saying these could not be incorporated into the one Standard.  So work continued on the preparation of one specifically for the PBGV.

In a letter dated 25 October 1982 the KC approved championship status, with the first Challenge Certificates to be awarded at Crufts on 10 February 1985.

On 3 April 1983 Terry Thorn judged the club's first independent open show at Little Gaddesden, near Berkhamsted.  From 61 dogs (many of whom were entered in more than one class, making a remarkable total entry of 116), he awarded Best Puppy in Show and Best in Show to Jomil Rigolo, born 18 July 1982 (Varon Zorro ex Jomil Leda).  Second in the Puppy Dog class went to Rigolo's litter brother, Rolande, who was to go down in history two years later at Crufts as the first PBGV to be awarded a Challenge Certificate.

This memorable year ended with the Kennel Club approving the PBGV Breed Standard.

The KC agreed that the club could retain the name Basset Griffon Vendeen Club, with its activities restricted to the PBGV - and the Grand Basset, when it arrived in the country.

Four pups were born on 10 February 1989 but, following the early deaths of some of them, only one - a bitch - Lynne Owens' Dehra Allo Allo, went on to appear regularly at shows

Although the BGV Club had been formed specifically to cater for both sizes of Basset Griffon Vendeen, in 1990 the Kennel Club placed the GBGV on the newly introduced Import Register rather than granting breed status. Fifty registrations were needed before consideration would be given to taking the breed off this register and the club discouraged indiscriminate breeding to achieve this number.

In July 1991 the interim Breed Standard was published, taking into consideration the FCI Standard but based mainly on the earlier BGV one, with wording in line with KC format.

The Kennel Club agreed that the BGV Club could hold classes for Grands at their 1992 open show. These, however, were to be classified as Import Register.  Three GBGVs were entered for judge Yvonne Dean who awarded BOB to Dehra Allo Allo.   With Import Register breeds unable to compete further, the Grand could not challenge the Best of Breed PBGV for Best in Show.

Having been removed from the Import Register from 1 January 1997, May that year saw the first club open show to schedule GBGVs in their own right. The judge was Jim Makin (Ekoz). Best of Breed went to Jaclin Mixed Blessings at Sweetdean.

In October that year, there were 25 GBGVs entered for judge Vivien Phillips at the BGV Club championship show, who awarded BOB to Dehra Allo Allo.

In 1998 GBGVs appeared for the first time at Crufts where they by far outnumbered other breeds in the Not Separately Classified Hound classes.  From the 30 Grands entered, Anne Macdonald awarded Best of Breed to Jessica Holm's 3yr old Dehra Esprit d'Amour.

After their fleeting appearance in NSC, the following year GBGVs had their own classes at Crufts for the first time. The judge was Kari Jarvinen (Finland) who, from an entry of 36, awarded Best of Breed to Vi Mochan's Melanter Fetlar (Dehra Esperance de Debucher ex Dehra Charlotte at Melanter), bred by Stella Blackmore.

The club marked the millennium by mounting the first ever World Congress for BGVs.

In 2003 the Kennel Club indicated they would give GBGVs championship status but they were unable to say in which year.  There was therefore some urgency to move from an interim to a final Breed Standard.

Amendments to the interim were presented at the 2004 AGM but several points needed clarification.  These and members' subsequent comments were reviewed.   Given the importance of the matter, the committee decided to hold an open meeting to finalise proposed changes.  In preparation for this, Linda Skerritt reviewed members' comments and researched the FCI Standard seeking to be faithful to the Standard of the country of origin and taking the opportunity to differentiate clearly between the Grand and Petit Standard.

Following the Open Meeting on 16 January 2005, the proposed Standard was presented to the AGM at Warwick on 10 April. Members present voted unanimously in favour of the final version and this was submitted to the KC in October 2005.

The BGV Club subsequently agreed minor amendments requested by the KC, who issued the final Standard on 1 January 2006, just in time for the first CCs to be awarded at Crufts on 10 March that year.